Listen to our Liberty Podcast

Simply click on the link to listen or save the MP3 file to your computer or player.

Big Jesus wins award for the ‘Best Community Entry’ in the parade. 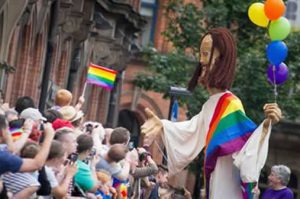 We had a unique perspective on Jesus, His fame and renown. If the crowds were silenced even the stones would have cried out to Him.

This must be what it was like for Jesus to enter Jerusalem, re-enacted for the benefit of his LGBT people…What does this say for us and for Him? 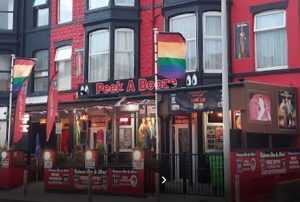 Church Zooming. 92% of Christians muted the speaker
when they began speaking about sin or hell.

The Christian congregation in Africa has grown by more than 4,300% since 1900 – a rate of expansion unknown since the earliest years of the Church. There are about 390 million practising Christians in Africa today, more than three times as many as in 1970. Over the next 20 years, this figure is expected to grow by a further 200 million.

The LORD said to Abram, “Bring me a heifer, a goat and a ram, each three years old, along with a dove and a young pigeon.”
Abram brought all these to him, cut them in two and arranged the halves opposite each other; As the sun was setting, Abram fell into a deep sleep…

When the sun had set and it was dark, a flaming torch suddenly appeared and passed between the pieces of the animals.
In that day the LORD made a covenant with Abram and his seed.

I was in the retail clothing business for over twenty years with a guy called Derek. Our business contract was just a verbal agreement based on trust.

Twenty years into our business I was needed less and less at the office. A capable management team was doing everything I used to do. Derek still worked full time as what he brought to the business could not be replaced by anyone else.

Liberty was on the horizon and I stopped going into work altogether. Derek was happy for me to become what is called a sleeping partner. It meant I got all the benefits from the business but did no work in it.

It was a very one sided agreement, he did the work I got the benefits. It was great for the years that it lasted.

And while I was a sleeping partner I trusted Derek to operate the business, he did the work and always gave me what he had promised.

Today’s reading is about a one sided agreement between God and Abraham.

It was in a time before pen and paper, solicitors and lawyers, so something visual and memorable had to be done to make the promise legally binding. According to the primitive custom of the day certain animals were killed and cut in half. The parts were laid out so as to leave a pathway between them.

Both parties involved in making the promise had to walk through the path together. That meant they both were legally obliged to keep the covenant, the promise. If either failed to keep the promise they could legally be cut in half, like the animals were, as a penalty.

But in Abraham’s case this promise was exceptional in that only God would pass through the animal pieces. It meant it was a one sided agreement binding upon God alone.

As God spoke and went through the animal pieces Abraham was in a deep sleep.

Though Abraham was a partner in the promise, he was a sleeping partner. Our father of faith trusted God’s promises. God alone then had to carry out the promises, without any help from Abraham.

God’s promised unconditional love and grace, and promises to bless us, all have this in common: we His children are sleeping partners who receive the benefits without doing any work to gain them. He gives them without any help from us.

The promise to Abraham was also to his ‘seed within his body’. So who is Abraham’s seed?

Gal 3:16 The promises were to Abraham and to his seed. Scripture does not say “and to seeds,” meaning many people, but “to your seed,” meaning one person, who is Christ.

And two verses later scripture says that it is IN Christ Jesus we have an inheritance that God gave to Abraham by a promise. We are ‘heirs according to the promise.’ Gal 3:29

So because we are in Jesus, this serious, everlasting promise, this covenant was made with Abraham applies to us. We, like Abraham are sleeping partners.

We don’t have to do anything to get the benefits of the promise, all we need do is trust the One who makes the promise.

So as ‘sleeping partners’ in the promise we do nothing to earn the benefits Jesus brings. We can rest in knowing that He has done and is doing all the work needed to make us and keep us in a state of being welcomed and greatly blessed by God. We simply get on with our lives knowing that at all times our connection with God is secure.