Jesus shocked the religious leaders of the day by spending his time with groups of people these leaders considered unacceptable. Jesus was clear that his ministry was for all people and included those who had been rejected by the society of the day, the tax collectors, the poor, the prostitutes, the foreigners, the beggars, the disabled, and the sick. 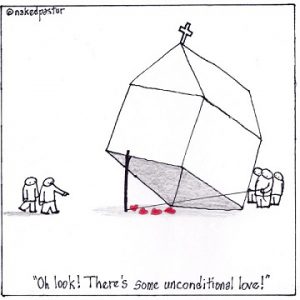 These people were referred to as sinners and the regulations written into Jewish Law stated that they were distanced from God. These were the people Jesus chose to live amongst and relate to.

Jesus said that through him all can gain access to the kingdom of heaven. Jesus came to save the world, not to judge it.

Jesus changed the way things work. No longer do we have to fulfil lots of strict standards of behaviour in order to be worthy to draw near to God. Now we all can be made worthy to approach God simply by having faith in Jesus and relying on Him.

The early disciples carried their cultural prejudices with them and it took a powerful vision from God to show the Apostle Peter that he should not regard any person impure or unworthy to be a Christian.

Jesus included those who the religious leaders of his day excluded. The testimonies of countless gay, lesbian, bisexual and transgender Christians are that even after they have been pressured to leave established churches they have known Jesus has never left them. Jesus knew all about our sexuality and gender before He caused us to come to know Him. He understands our sexuality and gender more fully than we do. After all he created us.

Once we have come into a relationship with him and are part of his family, God is committed to us forever.

Jesus gives us a rich tapestry of guidance for living our lives that is as relevant today as it was 2000 years ago. However, Jesus never spoke about same-sex relationships (along with many other subjects he never talked about). Not one word of condemnation. Surely if Jesus had issues with LGBT people he would have made this clear in his teachings?

There are important things to keep in mind when reading the Bible. We must always consider its context. In order to understand any writing (whether it be a letter, a speech, or even the Bible) it is necessary to understand its background. We need to consider who is speaking, to whom it is addressed, why it is written, and what the culture was like.

In the case of Scripture, the cultural and social context of biblical times was very different from our own. For example men had absolute power over their wives and children and their slaves. People were bought and sold.

The Bible was written in ancient languages (primarily Hebrew in the Old Testament and Greek in the New Testament) over many centuries. As anyone who speaks or reads more than one language will understand, translating requires interpretation and personal judgment. Even with the best of intentions, translators and copyists are quite capable of human error. The prejudices, bias and ignorance of the interpreter effect the translation of scripture both for the writer and reader.

Christians through the ages have often used parts of the Bible to defend their prejudices. Slavery, colour prejudice, the subjugation of women and the exclusion of divorcees can all be defended by quoting verses out of context. A judgmental attitude can find many Biblical quotations to decry others with. It is indeed true that applying statements in the Bible literally restricts and destroys spiritual life whereas being connected to the love of Jesus gives spiritual life. Jesus specifically warned us against judging each other, he himself did not judge but he did bring life.

Since Jesus came to demonstrate the love of God for each and every person let us to put our energies into loving God and each another.

Jesus outlined the purpose of his ministry as: The Spirit of the Lord is on me, because he has appointed me to preach Good News to the poor ; he has sent me to heal the brokenhearted and to announce that captives shall be released and the blind shall see , that the downtrodden shall be freed from their oppressors, and that God is ready to give blessings to all who come to him. Luke 4:18,19. Living Bible.

Jesus said that through him all can gain access to the kingdom of heaven.‘For God so loved the world that he gave his one and only Son, that whoever believes in him shall not perish but have eternal life. For God did not send his Son into the world to condemn the world, but to save the world through him.’ John 3:16-17

Through his death and resurrection Jesus.. ‘…cancelled the written code, with its regulations, that was against us and that stood opposed to us : he took it away, nailing it to the cross’ Colosians 2:14

After his vision Peter said:‘…God has shown me that I should not call any man impure or unclean’ Acts 10:28.

The writer of the letter to the Hebrew Christians states:

‘the letter of the Law kills, the Spirit brings life’2Corinthians3:6

“God has poured out his love into our hearts by the Holy Spirit, whom he has given us.”  Romans 5:5

All quotations are from the New International Version of the Bible unless otherwise stated.