Listen to our Liberty Church Podcast!

Simply click on the link to listen or save the MP3 file to your computer or player. 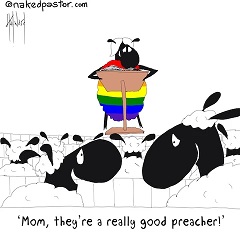 If God is for us, who can be against us?

For God who did not spare his own Son, but gave him up for us all—how will he not also, along with him, graciously give us all things?

Who will bring any charge against those whom God has chosen? It is God who justifies.

Who is he that condemns? Christ Jesus, who died—more than that, who was raised to life—is at the right hand of God and is also interceding for us.

Who shall separate us from the love of Christ? Shall trouble or hardship or persecution or famine or nakedness or danger or sword?

No, in all these things we are more than conquerors through him who loved us.

For I am convinced that neither death nor life, neither angels nor demons, neither the present nor the future, nor any powers,

Neither height nor depth, nor anything else in all creation, will be able to separate us from the love of God that is in Christ Jesus our Lord.
…

Adam was the one who once walked in harmony with God in His garden. God and Adam had a close relationship and like all good relationships it was built on trust.

God had advised Adam that eating from the tree of judgement would end in death, yet when Adam saw his wife eating the fruit and had not dropped down dead.

He fell into the trap of acting not by faith, but acting by sight. And when his wife said it was good, Adam was all to ready to believe her, and joined his wife in eating the fruit of the judgement tree.

Only afterwards thinking, if I’d only listened to God’s warning instead of listening to the wife and ruining my connection with my creator.

The separation between God and Adam, was from that moment on, God and humanity each walked their separate ways.

But people throughout the ages had sensed that something was missing, without that connection with their creator.

And over the centuries different people like Abraham, Isaac and Jacob, reached out for God and connected with Him by putting their whole trust in Him.

God though wanted more, never again did He want the pain of separation from humanity and so He set into motion events that would permanently keep the bond between Himself and Humanity.

God became human Himself in His Son, who He named Jesus. It was master stroke and the plan was hatched;

God Himself in his Son would free humanity from the power of death, the ultimate separation.

The plan was that His Son He would take humanities unrighteousness, their unbelief, He would even take the separation by dying, but then, shattering the power of death in bursting back into life.

Jesus would take full responsibility, the blameless Son would take the blame. Humanity would have the opportunity to start again.

A new beginning, a new chance to wholly trust in God. And so God’s will and plan was fulfilled, as His Son Jesus triumphed over death, over sin, over disbelief, no more to be separated.

God’s perfect plan of a divine exchange, fulfilled in Jesus.

Jesus gave his life in exchange for Humanity’s death.

His harmony and closeness with God in exchange for humanities separation and estrangement.

Joined together once again in union and in harmony, humanities relationship with God restored through Jesus.

All that humanity had to do was trust God, just as it was in the beginning. The ultimate price had been paid in Jesus’ unblemished life.

The thorns that represented mental pain, Jesus wore on His head to symbolise that He had taken all worry and all responsibility.

Any human efforts to make things right with God were no longer needed, humanity could rest in the final work of restoration in Jesus.

When Jesus cried out “My God, my God why have you forsaken me” for the very first time the Son was separated from His Father.

Jesus experienced what humanity had experienced; the horrors of the divorce; separation from God.

You cannot be more separated than by death, but death was overcome; and Jesus rising from the grave proved it.

And, when Jesus ascended back to heaven to be at God’s side, it showed that the gulf between humanity and God was no more.

The relationship was restored God and humanity, as one, never to be separated again, the fear of death removed.

Jesus had brought about righteousness for all who respond to God with trust.  Jesus brought about the freedom to walk with God, trusting in God’s faithfulness.

I once believed my sins separated me from God, I was in fear of loosing my relationship with Him.

We do wrong things, but Jesus took the impact of all that, no longer does our wrongdoing have power to separate us from God.

I thought that obedience was key to a relationship with God and I know many Liberty folks have held that same belief.

Ill informed people have told us we are sinners, I tell you, if that were true Jesus died for nothing.

Those in ignorance who have said we are unworthy, I tell you, if that were true Jesus died for nothing.

The ignorant have said that sin separates us from God, if that were true Jesus died for nothing.

The arrogant have said our lifestyle puts a gulf between us and God, I tell you, if that were true Jesus died for nothing.

People may curse us but God can only bless us, and if that’s not true; Jesus died for nothing.

I tell you, every promise to God’s children is confirmed in Jesus. He Himself promised “I will never leave you;” never ever, separation impossible.

Jesus is our guarantee, our inheritance, our great reward,

Jesus is the pathway, highway, gateway and doorway to heaven; and all that heaven has to offer.

Jesus is our righteousness and our Holiness our purity and our innocence.

Jesus is our rest and our peace, He is our shelter and our stronghold

Jesus is our friend and our freedom

Jesus is our brother and our saviour, He is our glory and our grace

Jesus is our King and He is our Lord.

And to that, all the folks of Liberty said… Aaaamen